Male
Munch Jr. is a prop character for the "Munch's Make Believe Band" 3-Stage set up at Chuck E. Cheese's. He is a small purple creature who served as the literal "junior" to Mr. Munch in the Tux Era before becoming a little brother of Rockstar Munch.

In the Rockstar era, Munch Jr. became even smaller, now being represented by a puppet. He stays primarily with his hundreds of siblings. During the 1990s, the Munch Jr. animatronics were removed from many of the 3 stages with their spots being boarded up and carpeted over, mainly due to either being vandalized by children or not working properly. The last one was in Wilmington, NC. It was not in working condition and, in 2020, amid the Covid-19 pandemic, the store closed, making him extinct, except for one remaining animatronic that's currently shown off at Chuck E. Con.

However, a repica Munch Jr exists at the Charlotte, North Carolina location.

Munch Jr. at the Wilmington, NC location (Closed in 2020) 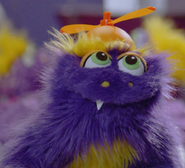