Jasper T. Jowls is one of the original Chuck E. Cheese's characters.

Debuted May 1977 In the earliest days of Pizza Time Theatre, Jasper had a low and dopey voice. He came from the woods of Tennessee, and spent his time playing the banjo. He was very dimwitted and usually never caught on to the insults Chuck E. Cheese threw at him, though he would snap back at him on occasion. To go with his idiocy, he was also quite the lunatic. Jasper laughed all the time and howled on stage, greatly annoying Chuck E., who would often yell "TURN OFF THE FRUITCAKE, DOG!", or "SHUT UP!", which would cause the backstage technicians to supposedly turn off Jasper, which would stop his laughter and calm him down, though there are sometimes where Jasper made Chuck E. laugh as well. He's also great friends with PTT Pasqually.

Even though he is goofy he was romantic to almost every Guest Star of the PTT Era (with the exceptions of Madame Oink, who could be in love with Pasqually, and Helen Henny, who Chuck E. has a crush on).  He spent time with Foxy Colleen backstage, Sally Sashay complimented him throughout her show, and the most definite one was his obvious crush on Harmony Howlette.

As the guest star days faded away, Jasper gradually became smarter and got a higher voice. He stayed this way until the onset of Concept Unification.

Jasper is a brown hound dog with large "jowls", as his name suggests. He had buck-teeth (though only in illustrations), and wore blue overalls with a straw hat. In addition, he had brown shoes. In animatronics, and in several media, he wore a shirt to go with his overalls, commonly being a long sleeve white shirt with black spots. 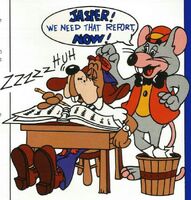 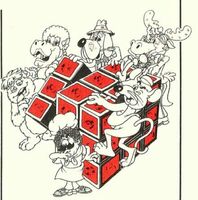 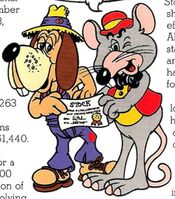 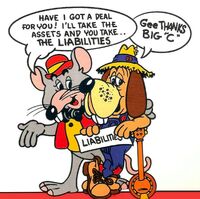 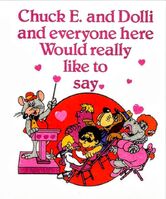 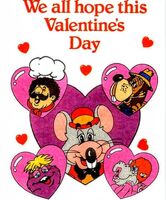 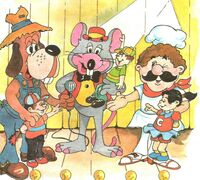 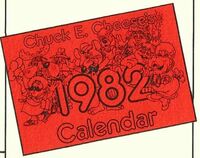 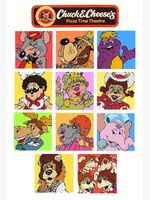