Dolli Dimples is a blues/jazz piano-playing hippo that would often sweet-talk and dedicate songs to the guests sitting near the other side of her piano. She would also reminisce of her former husbands, often tying them in to monologues of song titles. She also has been known to use innuendo, and makes suggestive comments.  She also has pink polished nails on her fingers to enhance the way she looks. She was the first animatronic to play the piano until Artie Antlers and B.B. Bubbles replaced her. She has two known showtapes being made in 1978 and 1982 ( her second showtape). She reappeared as a cameo 35 years later after the character retired in the Halloween at the Pizza Time Theatre short.

Dolli's appearance in Halloween at the Pizza Time Theatre

Taken within 1985 in the Mentor Ohio Pizza Time Theater. 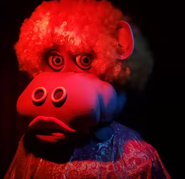 Matt the franchise's Dolli, personally, I do not know too much about this Doli.