Crusty the Cat debuted with the rest of the Pizza Time Players in mid 1977 and stayed until late 1978, in San Jose California.

Crusty was nicknamed "The Cat's Meow" and was Chuck E.'s right hand man. After appearing in the first two showtapes, he was replaced by Mr. Munch in November 1978, making him the first character to be retired.

He was voiced by John Widelock, who also provided the original voice for Chuck E.

He also had two different Animatronics: the one in the Photo is his 1st Generation animatronic; his 2nd Generation Animatronic had more movements, such as being able to turn his body. 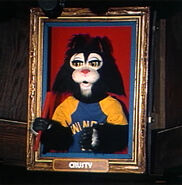