Copernicus, also known as the Dancin' Kitten, is the pet cat of Rockstar Chuck E. Cheese. He is very shy, and has only ever spoken to Rockstar Pasqually.

"One night, after there had been a cold winter rain for several days, I went to see if the rain had finally stopped. It had!

The night sky was so clear and beautiful, I felt as though I could see every star! That's when I heard a faint meowing sound. I followed the sound to a pile of clothes someone had left on the street, and after uncovering them found a tiny kitten!

The kitten was so hungry and cold, and I couldn't bear to leave him outside any longer! So, I brought him in and gave him some warm milk and a blanket.

After a couple days I noticed the kitten doing better, but his little paws were still so cold! I dug through some of my old stuff and found an old pair of mittens and put them on the kitten.

The next day, my friend Helen Henny came over and asked what his name was. I had just been calling him 'the kitten who wears mittens

But Helen insisted that he needed a proper name. I thought back to the night I found him, and remembered how clear the nights sky was and how many stars I could see.

So I named the kitten 'Copernicus' after the famous astrologer! To this day, Copernicus still wears his mittens!" — Chuck E. Cheese recalls how he found Copernicus on his Instagram story. 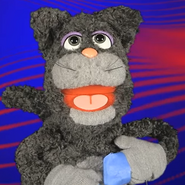