The Circles of Light stage is a one-character Chuck E. Cheese's animatronic stage show that was first introduced at the Montfort, TX store in 2012, and a botless variant in 2013. It's currently only offered for franchises.

In early 2012, Weigl became a Vendor Partner with CEC Entertainment Inc., to help with the new stage design. CEC was planning for the fifth iteration of the main stage attraction (which up to this point were the Studio Cs) when Weigl was asked to engage in the conversation. A major priority was to evolve the technology to allow for more advanced programming and control. Dubbed Circles of Light, the new stage show includes many new elements designed to further engage the guests and highlight the Chuck E. Animatronic, and were to include features such as; a large HD screen on the wall, enhanced theater-quality lighting, and touch-sensitive LED-backlit wall panels. The new stage is fabricated by Corman and Associates, and continues to use the famous Chuck Animatronic produced by the California-based animatronic’s studio, Garner Holt Productions.

This stage was first installed at Dallas "Montfort", replacing their Star Stage. This stage features a large HD screen on the wall, dimer lighting, and a bunch of Circles with lights. Chuck E. (being reused from the Star Stage) is on a stage with a railing around him (taken from the Galaxy Stage) and a giant light-up circle with the half split in the middle. The Circles of Light would be installed with 16-Movement Bots with the exception of Dallas. This version would only be installed in 5 more stores with Springfield, Pennsylvania being the last store to get this version. Los Angles (Wilshire) also had this version they were supposed to open in 2012, but got delayed to 2014, this location has since closed.

The Second Version would debut at San Diego (Collage Ave), the only change that was made was the giant circle now had lines going down. 16-Movement Bots were still press with this version with the exception of the Florida COLs.

In September 2012, the test stage in Dallas Montfort removed their animatronic. This would not affect Circles of Light installations afterwards until December 2013 when the second animatronic-less store opened their doors in Montgomery, Alabama. From there Circles of Light stage would be installed with or without animatronics until 2014 when Los Angles (Wilshire) opened. After this all stores got botless variants with the exception of franchises like Tucson, AZ, Chandler, AZ and Kapolei, HI. Originally, these botless versions kept the giant circle, but late versions removed it.

The 1st COL In Dallas, TX

The COL In Birmingham, AL

The COL in Chandler, AZ

The COL in Port Orange, FL 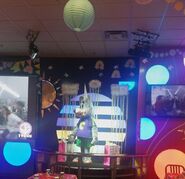 The COL in Austin, TX
Community content is available under CC-BY-SA unless otherwise noted.
Advertisement