Tux Chuck is the second iteration of Chuck E. Cheese. He was introduced 1990 with the onset of Concept Unification, a process that would merge CEC with its sister company Showbiz Pizza Place. In 1994, Tux Chuck began to overlap with a younger, more contemporary design for the character, Coach Chuck. The two designs alternated until the early 2000's, when they were replaced by Cool Chuck.

Showbiz Pizza Time commissioned Texas-based Peeler-Rose Productions to revamp their brand. As a result, Chuck E. Cheese was attired in a tuxedo while still keeping his derby hat, and was drawn in a more "cartoony" style. Voice actor Scott Wilson kept his role as Chuck E. Cheese before being replaced by Duncan Brannan in 1993.

In 1993, Showbiz Pizza Time redesigned Chuck E. Cheese once more to compete with new family entertainment center Discovery Zone, which resulted in "Tux" alternating with a new design, "Coach Chuck". The change also gave both designs of the character a softer, less rat-like face. The designs overlapped before Showbiz Pizza Time introduced Cool Chuck, and by 1999 the design was no longer being used; nevertheless, the "Tux" design was still used in restaurant décor, animatronic costumes (till 2001, the last one being in Attleboro, MA, removed in January 2014), and "Tux" walkaround costumes were still used in circulation as alternate costumes up through 2004, when CEC Entertainment, Inc. (the renamed Showbiz Pizza Time) retired the design completely at the onset of Phase 4.

Tux (or Derby Chuck as some fans prefer) Chuck is a gray-furred mouse that wears a tuxedo outfit composed of a black tailcoat with gold or yellow lapels as well as a matching cummerbund and backside, a white dress shirt with one or two black or white buttons, a large red bow tie, long black pants, white gloves, and black and white loafer shoes (the latter two not being shown in the animatronic versions of the character, and being from his earliest design). In the cartoon version, the tux was only worn on special occasions, and he retained his red vest. Unlike Chuck E.'s previous incarnation, he would change his outfit from time to time, including a sports uniform, a musician's outfit, and a cowboy attire. However, like his previous incarnation, the character had long, rat whiskers, although they were removed by 1994. Chuck E. retained his signature red and yellow derby hat for the final time in this design until 2017. According to a 1994 trademark pamphlet, Tux Chuck is approximately 25 years old.

The Coach design featured a red and blue cap with a yellow star on it, a red sweater, and blue sweatpants. On the store logos, the sweater was yellow and the hat was all red.

Tux Chuck was designed and animated by artists Dan Peeler and Charlie Rose. 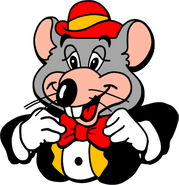 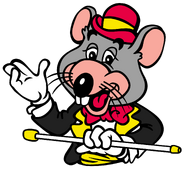 Tux Chuck with his hands out alongside a caption.

Tux Chuck patting a boy on the head, surrounded by children.

"I think I hit the jackpot!"

Tux Chuck with his hand over his head, exasperated. 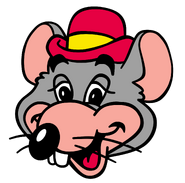 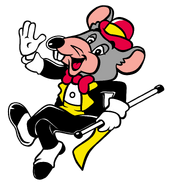 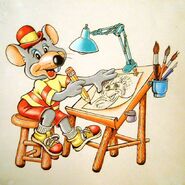 Tux Chuck, in his "sports outfit", drawing a picture of Helen Henny in an art studio.

Tux Chuck posing in his "sports outfit" and sunglasses. 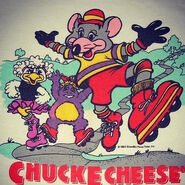 Tux Chuck wearing a graduation gown, cap and tassel, and holding a diploma. 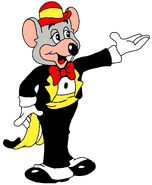 Tux Chuck holding his arm out. 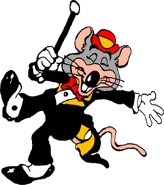 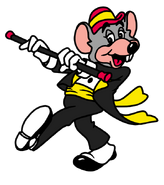 Tux Chuck posing with his cane.

Tux Chuck walking with a cane and giving a thumbs-up. 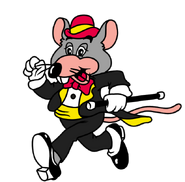 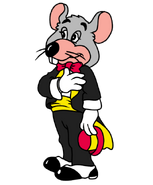 Tux Chuck in a patriotic pose. 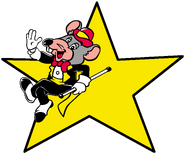 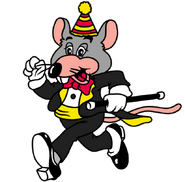 Tux Chuck running with a party hat on. 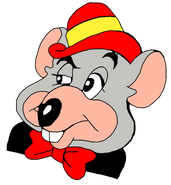 Tux Chuck with an annoyed expression. 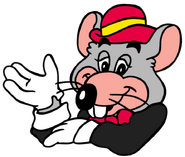 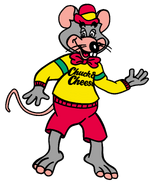 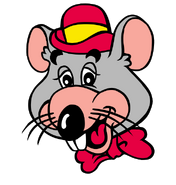 Tux Chuck in a train.

Tux Chuck walking with a cane and waving.

A silhouette drawing depicting Tux Chuck running and being followed by children. 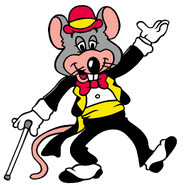 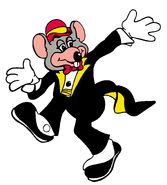 Tux Chuck in a skipping pose.

Tux Chuck posing and singing into a microphone. 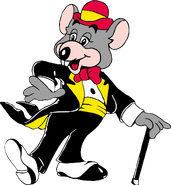 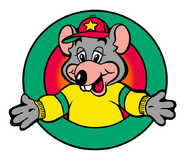 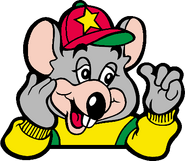 Coach Chuck with his hands on his hips.

Coach Chuck with his arm out. 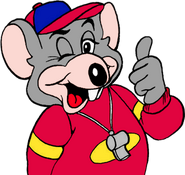 Tux Chuck posing with his cane.