"Avenger Chuck" or "Cool Chuck" is the third iteration of Chuck E. Cheese.

The third incarnation of Chuck E. began in 1996. He still had the same personality as Tux Chuck, but was exclusive to commercials. He was dressed as a skater in the advertisements, but never had the personality of one. Avenger Chuck went back to the roots of Tux Chuck and became an every man who loved to entertain with his friends. He always tried to keep things in control, though he has lost his temper with the band in a few shows. At the end of the day, he loves his guests and wants to be where they are. He’s also known for playing the saxophone and sometimes the electric guitar in most showtapes and commercials.

In 1998, Studio C was introduced to the public with a new look, and another Chuck E. shift. Chuck E. was this time voiced by Jeremy Blaido, who would eventually become the voice of Jasper T. Jowls. Studio C was meant to replicate a news studio, which unfortunately gave Chuck E. a bland personality. After CEC Entertainment couldn’t afford to replace the existing stages with Studio C, they dropped the News Show format and went back to the band dynamic. This is when the modern Chuck E. really started to form. Duncan was hired back on the job of voicing Chuck E. and he was in that role until 2012.

Avenger Chuck is a six foot tall mouse with gray fur, tan skin, and blue eyes. He wears a purple and green t-shirt with a green-and-yellow "C" on the front, a purple, green, and yellow baseball cap worn backwards, black skater gloves, green shorts with a confetti pattern, yellow socks, and black and white sneakers with red laces.

Cool Chuck was designed and animated by Dan Peeler and Charlie Rose, who were previously responsible for Tux Chuck. 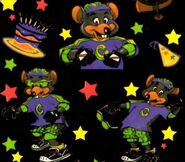 Chuck Is Holding A Pizza. 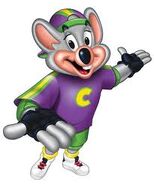 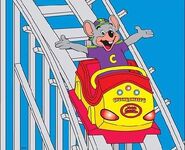 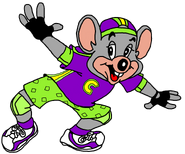 You Can Say That Again 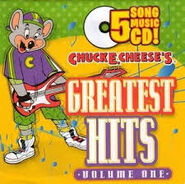 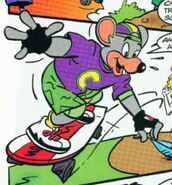 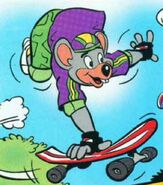 I Opened The Soda 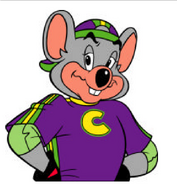 Why Is This Girl Confused? She Needs To Smile! 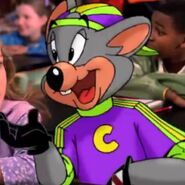 Could Chuck E Talk To You?

Wink Can See It! 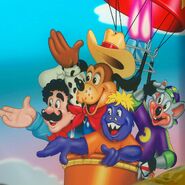 Everyone be on the lookout! Maybe we might just spot her!

Put the pedal to the metal!

It's Raining Chuck Es (And Games), From Out Of The Sky!

And This Is How The Ticket Splash Was Invented.

For You, My Lord

Chuck E In Space! Coming In A Pizza Place Near You.... 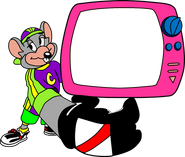 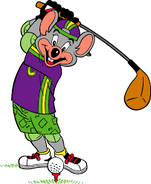 Hello? Who Is It?

Come Here, Give Me A Hug! 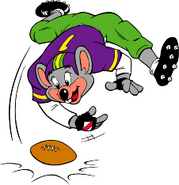 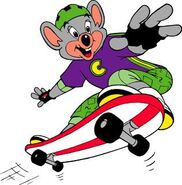 Chuck E Continues To Do The Ticket Splash. 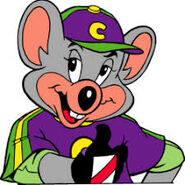 Hey Everybody, It's Me Chuck E. Cheese 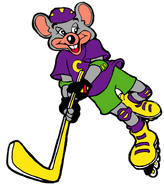 You Can Come With Me To The Lab!

All Right, You Can Come Back in Now!

Cool Chuck with his arms out.

Cool Chuck with his hands out. 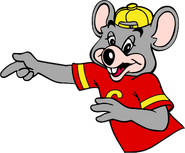 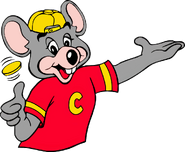 Cool Chuck flipping a token into the air.