Bella, also known as Bella B., is a rabbit character who first appeared in Show 1, 2018 in the song "Bailando". Bella is bilingual, speaking both English and Spanish, and is the most recent member of Munch's Make-Believe Band.

Originally, Bella was a brown rabbit with darker brown hair, blue eyes, a pink jacket, a blue skirt, and a flower in her hair. Her updated appearance upscaled her head, changed her eyes to brown, made her fur lighter brown, removed her dark brown hair, and changed her outfit to a pair of yellow overalls with her name on them.

Bella as she appears in "Bella's Holiday Fiesta" 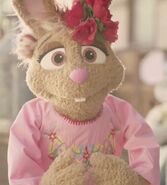 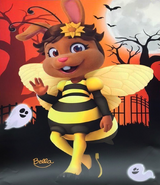 CGI Render of Bella in her Bootacular costume