The 3-Stage is a full Munch's Make Believe Band animatronic stage that is found at some Chuck E. Cheese locations that were originally at Showbiz Pizza Place locations.

The original format for the 3-Stage dates back to the 1980s at Showbiz Pizza Place Restaurants. As this stage design was the default type for the chain's animatronic band: The Rock-afire Explosion.

A Prototype was made around 1988 which ended up not being used, using the Pizza Time Theater designs of the characters. According to Jul Kamen (designer of the CU Prototype), after the Prototype, it was decided that Dave Thomas (a former employee of Creative Engineering), would be the one redesigning the show. Dave went on to "Mitzify" Helen to make her more marketable, and placed Munch on the keyboard due to his similar character-design to Fatz.

As its name implies, the Chuck E. Cheese's characters are placed on 3 separate stages repurposed form the former Rock-afire Explosion animatronic show. Everything remind the same from the Rock-afire stage with the exception of equipment being upgraded, characters being moved or removed, and the Helicopter Light being installed.

Chuck E. Cheese is on the right on his own stage on top of a black triangular pedestal with a TV next to him (Referred to as the Jukebox) displaying the showtape footage, a giant star behind him, a neon sign with his name, and a black curtain in the back.

Center Stage is designed to resemble a rooftop at night, the stage contains Helen Henny, Mr Munch on the keyboard and with a sign with the name of the band behind him, and Jasper T. Jowls sitting on a barrel with Beach Bear's guitar. A Building and Moon animatronic are behind the building backdrop behind Helen and Jasper respectively. A small animatronic called Munch Jr is placed inside of a barrel between Helen and Munch. Above the stage is The Wink.

Stage Left contains Pasqually the Chef on the drums on his own platform, and a camera animatronic next to him (referred to Pizzacam by fans) housed in a speaker box. The pair are located on what resembles a standup comedy stage with a brick wall reading "Pasqually's Amateur Hour" in Grafiti.

The first Chuck E. Cheese's 3-Stage was installed in November 1989 at the original Dallas "Monfot", Texas location, and the Showbiz Pizza Time Headquaters. By this point almost everything was finalized such as the band being named "Munch's Make Believe Band". However, there were a few differences from the finalized stage, such as Pasqually's Brick Wall, Jasper's Orange Overalls, the Pink Munch's Make Believe Sign, and The Building. A few other 3-Stages were installed and tested during 1990 before the finalized and full rollout of the 3-Stage in 1991.

By 1992 all Showbiz locations became Chuck E. Cheese, with the exception of Fullerton, CA (now closed) and Tallahassee, Florida (Both were never Showbiz's and opened in the 90's). After a location finishes Concept Unification, they would play a specific showatape for a few weeks before switching to the most current showtape at that time.

Originally, the animatronics were fitted with latex masks, similar to the masks on Rock-afire Explosion characters prior to Concept Unification. In the late 90's the characters had their latex masks updated to look more friendly. However, beginning in November 1999, in a cost-cutting measure, the latex masks on the animatronics would begin to be replaced with ones made out of plastic at all locations. Latex masks lasted in stores till 2016

As early as the mid 1990's characters such as Pizzacam and Munch Jr have been removed from the stages either due to neglect, or vandalization by children which made them hard to find over the years. Building and Moon also fell down this path after the 2000's.

In Late 2010, a stage the CU 1-Stage was introduced as an attempt to removed all 3-Stages worldwide, possibly to distance themselves from the Rock-afire stage setup, however only 3 were ever installed. 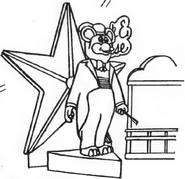 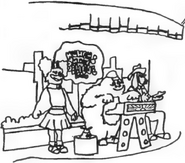 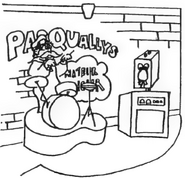 The 3-Stage in Huntsville, Alabama.

The 3-Stage in Phoenix, Arizona. (Note: It has the prototype backgrounds)

The 3-Stage in Visalia, California.

The 3-Stage in Tallahassee, Florida.

The 3-Stage in Boise, Idaho.

The 3-Stage in Billings, Montana.

The 3-Stage in Springfield, Ohio.

The 3-Stage in Dallas "Westmoreland/Redbird", Texas. 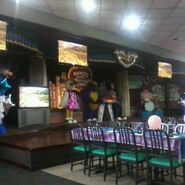